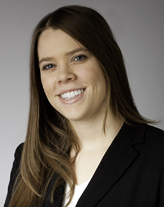 Mary Laurel Thibadeau died on December 2, 2018 in Pittsburgh PA after a valiant battle with cancer. Ms. Thibadeau was born on December 15, 1983, in Pittsburgh, PA. She was a graduate of The Ellis School, the University of Virginia, earning a BA with Distinction in Cognitive Science in 2006, and from William & Mary Law School in 2009, where she was honored with the Order of the Coif. Upon graduation, Mary became a law clerk for Judge Kevin R. Huennekens in the United States Bankruptcy Court for the Eastern District of Virginia. She joined the law firm of K &L Gates in 2011. Ms. Thibadeau's primary practice was complex commercial litigation and disputes. Secondary practices included Corporate/ M&A, Financial institutions and Services litigation, Insurance Coverage and Restructuring & Insolvency.

In her personal life, Ms. Thibadeau enjoyed traveling abroad. Favorite trips included visiting Greece, Turkey and France with various family members and friends. Most favorite of all of her adventures abroad were her trips to London, where she explored museums and theater with wild abandon. Travels in the United States included many trips to Seaside, Florida, Atlanta, Georgia, Eugene, Oregon as well as other favorite places. Her trips to Maui were a special joy to her. She explored waterfalls, rainforests and swam with sea turtles. Ms. Thibadeau is survived by her husband, Joseph McCaffrey; father, Robert Thibadeau; mother, Susan (Sorozan) Thibadeau; brother, Robert Thibadeau Jr.; sister, Anne (Thibadeau) Greene; her nephews Wylie Greene, Welles Greene, Brendan Kuzma, and Miles Kuzma; and her many extended family and friends.